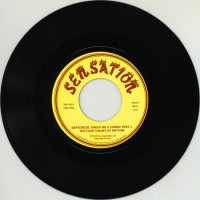 Four Sades Of Rhtyhm
Bartender, Knock Me A Zombie Part 1+2

Recorded in around 1949 by Bernie Besman for his Detroit-based Sensation label, this ode to the high-powered cocktail by the Four Shades Of Rhythm lay undisturbed in the vault until recently unearthed and given an airing on Cerys Matthews' BBC Radio 6 show. There was an immediate demand to make it available to the public at large and so the Ace team sprang into action and here it is in a part one and a part two, the first Sensation release since 1950.