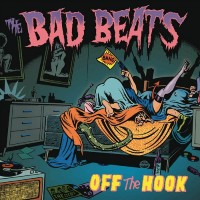 Bad Beats
Off The Hook

Garage rock is alive and well in 2019. It lives in the alleys of East Vancouver, born and bred in the traditions of the Pacific Northwest and raised on 'Pebbles' and 'Nuggets'. Armed with a Fender Telecaster, an Acetone organ, and a soulful frontman whose harmonica work might send Little Walter to AA, it finds many new converts and takes no prisoners. It is The Bad Beats. They serve up a dozen high-octane blasts on their second Soundflat release, mixed in mono for your lo-fi pleasure. Eight blistering originals complement the four covers on 'Off The Hook', including The Rolling Stones' title track and a haunting version of the Townes Van Zandth ballad 'Waiting Around To Die'. The lone instrumental 'Gooseback Machine' is a straight-up driving blues jam featuring a guest appearance by Canadian ex-pat Spencer Evoy (MFC Chicken) on sax. The album fills out with a sonic barrage of three-minute garage shock morsels guaranteed to keep your head bobbing and knee jerking.