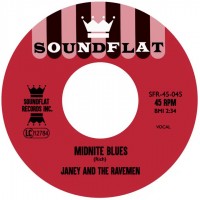 JANEY & THE RAVEMEN pick up the beat baton from where the legendary KAISERS left off and deliver a sound so authentically 1964 it hurts. The Ravemen include in their all star line up not one but two of The Kaisers founding members alongside former members of The Rapiers & Fabienne Delsol. This fabulous mixture produces a sound which will not disappoint, British Beat at its finest. When listening to their sound it becomes obvious these boys & a girl have the same American R&B influences that the bands back in the day had. Think BERYL MARSDEN / LULU / SANDRA BARRY backed by THE ROULETTES / SWINGING BLUE JEANS and you won't be far wrong. Solid pounding back-beat with skilful, pure guitars, perfect harmonies topped with the irresistible versatile female vocals compliments of the 1st woman of beat Janey.

Janey & The Ravemen
Stay Away From Boys

Janey & The Ravemen
Stay Away From The Boys

South Filthy
You Can Name It Yo' Mammy If You Wanna...