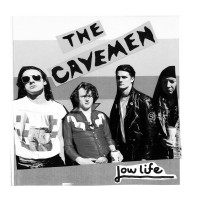 Thee most insane CAVEMEN of New Zealand return to Slovenly with a brand new track recorded during their sojourn in Brazil while nuking Earth on their recent world tours, and an outtake from the famed namesake "Nuke Earth" LP sessions is scoochin' up mighty close to it on the A/side, while "Drownin'" shows the boys at their most primitive (no, it's not a Gories cover, but it's at least twice as raw!), and it should - it was recorded when they were still in high school. We could easily stand a whole album of this mess!

Cavemen
Dog On A Chain