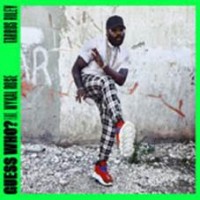 Renown reggae singer Tarrus Riley is back on VP Records with his new single "Guess Who?" which features Mykal Rose (alias Michael Rose) of the legendary group Black Uhuru who originally released their hit "Guess Who's Coming to Dinner" in 1979 (titled after the famous 1967 movie with Sidney Pottier). The re-imagined version by Tarrus Riley brings a fresh modern twist to the classic song, "Roots with a little pepper" Tarrus says about the single, and sees finally the day of light as 7"inch vinyl single in a limited picture sleeve edition including an exclusive dub version on the flipside.Produced by Sly Dunbar, Robbie Shakespeare, Shane Brown and Dean Fraser, the remake comes at a time when people are taking a stance on political and socio-economical issues more than ever. "Guess Who's Coming to Dinner" is a simple way of stating that one is -coming for their food- as Tarrus chants throughout the song. The single seamlessly bridges the gap between traditional conscious roots music with a bouncy dancehall riddim and swagger.