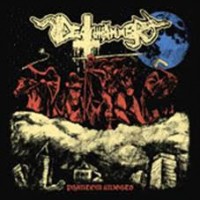 HELLS HEADBANGERS is proud to present DEATHHAMMER-s classic debut album, Phantom Knights, on vinyl LP format for the first time ever. Originally released in 2010, Phantom Knights was the highly anticipated first full/length strike from a duo of young Norwegians barely out of high school. DEATHHAMMER had established that anticipation with a clutch of demos that proved that the ancient magick of blackthrash was far from dead< with Phantom Knights, however, they resuscitated it completely! Like some strange, seamlessly authentic time/warp from the days when Sodom and especially Destruction were releasing their respective, undeniably classic debut EPs, the onward thrust/and/crush of Phantom Knights is all hysteric, high/speed energy> utterly bewitching, absolutely addicting, and impossible to deny. One of the hottest underground metal bands currently going, hear the beginnings of the DEATHHAMMER legend here!