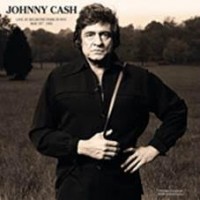 The Man in Black as captured live in Belmond Park, New York City, in May 1981. Essential tracklist with some of his major hits. The country hero had just released the album The Baron on Columbia and was touring all over the US in front of his longtime fans and brand new supporters. A new decade brought a classic live set from a reinvigorated country music legend.Track list Side A 1 A Thing Called Love 2 Sunday Morning Coming Down 3 Folsom Prison Blues 4 Without Love Side B 1 The Baron 2 Doin' My Time 3 I Walk The Line 4 Big River 5 Ring Of Fire