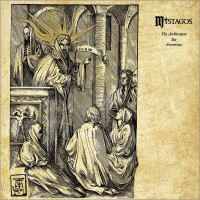 After the experimental "Pvrvsha" EP, BlackSeed Productions now proudly announces the release of Mystagos's debut album "Ho Anthropos tes Anomias" in 12" LP (previously released in CD format by Clandestine Faith Prods). Written in the archaic, elder century biblical tongue, this conceptual album narrates the parable of the Wordbearer as he attempts to elevate his disciples's spirits and guide them towards the Black Flame. "Ho Anthropos Tes Anomias" is a fictitious tale of metaphysical divination, yet bearing philosophical truth, executed through a 45 minutes dose of raw orthodox Black Metal. The album has been remastered, but preserving the original crude mix that gave it its distinct sound and atmosphere. This edition is limited to 333 copies in black vinyl, including insert with the texts of the tale.

Nightfell
The Living Ever Mourn

Megadeth
Killing Is My Business