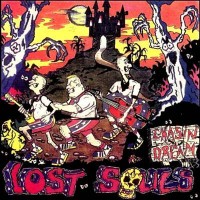 Formed in the late 1980's, the Lost Souls started playing small local venues to enthusiastic crowds, but soon the bright lights of London beckoned. Cramming themselves, their instruments and assorted bods into a hired van, they hurtled down the MI for the first of many London gigs. It was at one of these gigs that they wore spotted by Roy Williams, head honcho at Nervous Records, who knows a good thing when he sees it! The Lost Souls went to Europe for the first time (as a support act to Torment and The Rattlers).

Pitmen
Back To The Pit