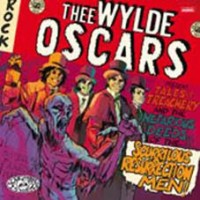 From essential ingredients including the sweat of Little Richard, the punk ramshackle chords of Chuck Berry, and the hip/shaking voodoo of Bo Diddley, Thee Wylde Oscars have conjured their own treasure/trove of gems from a pirate-s garage... Trinkets include choppy power/chord guitar bursts, three/part harmonies, a bass&drums combo hurtling down Highway 61 at midnight, and shards of saloon piano... Thee Wylde Oscars modus operandi> cut it live, loud and proud, and let the devil take the hindmost...reel it, rock it, swing it, tear it up, and stick it back together with gaffa tape and blood lust... Thee Wylde Oscars...the real deals in Cuban heels.@Hailing from Melbourne, Australia, Thee Wylde Oscars play garage punk infusing the very best of 60's continental beat music and American soul with the manic energy and attitude of punk bands from the 70's. From the Who to the Velvet Underground to Johnny --Guitar-- Watson to Cuby and The Blizzards to AC&DC< with this many good influences it's hard for the WYLDE OSCARS NOT to come up with something that is unabashedly ROCK N' ROLL!Founding member Jay --Wylde-- Wiseman is not new to the garage scene. He was a member of seminal garage RnB acts such as The Trebels and The Hoods throughout the 80's and 90's, playing the thriving scenes in San Diego, Los Angeles and San Francisco and Seattle. In fact, a song by his band The Hoods, entered mythic status with its inclusion into the Rhino CD box set --Children of Nuggets--, alongside garage luminaries such as The Lyres, The Stems and The Cramps amongst others.So if you dig bands like the Sonics, the Saints and the Woggles, this one-s for you daddy/o!!!

Electric Mess
The Beast Is You