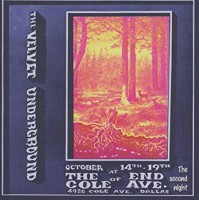 Velvet Undergound
At The End Of Cole Ave-2nd Night (2xcd)

The Velvet Underground were arguably at their live peak in late 1969. Lou Reed, Sterling Morrison, Maureen Tucker and Doug Yule (whod replaced John Cale a full year previously) had developed into a sensationally tight and adventurous quartet, and this show - the second of two recorded on consecutive nights before a tiny audience in Dallas, Texas - is considered by many of their fans to be the finest surviving document of them in performance.