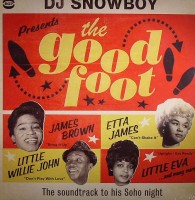 This is the latest in our series of DJ-inspired releases, compiled by one of worlds leading funk, soul and R&B spinners, Snowboy, based upon his London club night The Good Foot held every Friday at Madame Jo Jos in Brewer Street, Soho. A sweaty underground den, it is the home of the very best music and the top favourites are included here.Snowboy has DJed around the world: from the UK to Japan and all points in between. He has been the music selector for Craig Charles Funk & Soul show on BBC Radio 6 and is a curator for the Vintage Festival. His latin jazz band has released nearly a dozen albums since the early 1990s.The music on the album features many of his discoveries, as well as several classics that continue to fill dancefloors. Tracks such as Etta James Cant Shake It and the Contours Do The See Saw were played from CD as previously unreleased masters and rapidly became Friday night soundtracks (our LP version is their first vinyl release). Other cuts by the Ikettes, Dorothy Berry and Little Eva have been worked relentlessly until they have become anthems.track listingSIDE ONE1.DON'T FEEL SORRY FOR ME - The Ikettes2.CAN'T SHAKE IT - Etta James3.GET READY / UPTIGHT - Little Eva Harris4.MISERY - The Dynamics5.NUTHER'N LIKE THUTHER'N - Willis Jackson6.BABY, DON'T YOU KNOW - The BrownettesSIDE TWO1.I'LL GIVE YOU MY LOVE - Sue Ann Jones2.OH BABY DON'T YOU WEEP - Luther Ingram3.I SAY YOU'RE DRIVING ME CRAZY - Dorothy Berry4.I DON'T LOVE YOU NO MORE (I DON'T CARE ABOUT YOU) - Jimmy Norman5.DON'T PLAY WITH LOVE - Little Willie John6.SOUL BROTHERS TESTIFY PT 2 - Soul SendersSIDE THREE1.ROUGH LOVER - Aretha Franklin2.BRING IT UP - James Brown3.COMING BACK TO ME BABY - James Carr4.LOOKING AT THE FUTURE - Little Johnny Taylor5.JUST A MISTAKE - The Barrino Brothers6.BOYS - The ShirellesSIDE FOUR1.YOU DON'T LOVE ME - Z.Z. Hill2.SWEET TATER PIE - Mongo Santamaria3.WHY DON'T YOU DO RIGHT? - Mark Murphy4.THE WATUSI ROLL - Hank Marr5.DO THE SEE SAW - The Contours

Jo, Patti
Make Me Belive In You/ Ain't No Love Lost