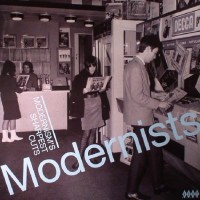 Modernism goes vinyl! After two successful CD volumes, Kent's look at the sort of R^B and club soul that could have been danced to by the original mods - if only they had known about it - arrives with a special vinyl edition.Gathering up favourite discoveries from the CDs, this 14/track LP is augmented by other tracks culled from the mod jazz series together with a couple of exclusives.This compilation is a selection of high spots, with something for every mod fan whatever the style. Classic club soul from Bob ^ Earl, Bessie Banks and Jeb Stuart jostles with jazzy R^B from Floyd White and Clarence Daniels plus some almost/funk from Chuck Higgins and Chet Ivey.Three tracks are released on vinyl for the first time whilst many others are seeing their first reissue on the format. One of these is the super rare o' by Little Johnny Hamilton and the Creators, a band that would go on to become 1970s chart/toppers War. track listingSIDE ONE1.SUNDOWN / The Merced Blue Notes 2.THE REAL THING / Troy Dodds 3.ALL AROUND THE WORLD / Chuck Higgins 4.I'M GONNA GET YOU / Leroy Harris 5.*YOU SHOULD HAVE BEEN A( DOCTOR / Bessie Banks 6.DANCING EVERYWHERE / Bob ^ Earl 7.SOUL IS MY GAME / Chet "Poison" Ivey ^ His Fabulous Avengers SIDE TWO1.GO / Little Johnny Hamilton ^ The Creators 2.AIN'T THAT SOUL / Teddy Reynolds 3.A FEELING DEEP INSIDE / The Corvairs 4.ANOTHER CHILD LOST / Floyd White 5.HARD WORKING GIRL / Clarence Daniels ^ Obie Jessie 6.JET SET / Mel Williams 7.EAST SIDE / Hank Jacobs

Staples, Mavis
We Get By