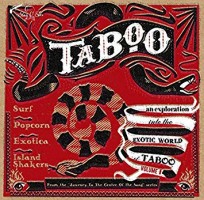 The series 'Journey To The Centre Of The Song' celebrates one song at a time, and presents it in many guises and interpretations. This first release in the series is dedicated to the classic tune 'Tabu', written by Margarita Lecuona (also responsible for 'Babalu', a classic as well), who was a cousin of the famous Cuban composer and pianist Ernesto Lecuona. The song, recorded as 'Tabou', 'Tabu' and 'Taboo' is a jazz and popular music standard which was first recorded by Cuarteto Machin in 1934 and later made popular by The Lecuona Cuban Boys and others. The aforementioned guises and interpretations span genres from Charles Blackwell's upbeat surfstrumental shaker to the brassy exotic tones of Tito Rivera, from the Cumbian island sounds of Cyril Diaz to Sylvie Moras silky smooth popcorn rendition. The record is completed by Arthur Lyman's crazy voodoo lounge version that evokes visions of palm trees and sun-drenched white sand. So sit back and enter the intoxicating world of ... 'TABOO'.TRACKLIST: Side A.1. Charles Blackwell Orchestra - Taboo2. The Shangaans - Taboo3. Lecuona Cuban Boys - Tabou4. Caterina Valente - Taboo5. Tito Rivera & His Cuban Orchestra - TabooSide B.1. Frankie Trumbauer's Orchestra - Taboo2. Cyril Diaz & His Orchestra - Tabu3. Sylvie Mora - Taboo4. Arthur Lyman - Taboo