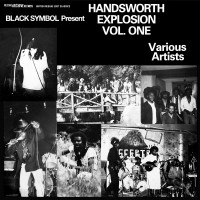 Ahead of the release of a CD combining both volumes of this unique musical project, we are pleased to make "Black Symbol present Handsworth Explosion Vol. One" once more available on its original format, vinyl.As with the second volume, the original of this release suffered from limited distribution and despite the valiant efforts of band members to promote the album, literally travelling around the UK's record shops with boxes of LPs, the original release sold in very limited numbers. It has justifiably become one of the most sought after and expensive British reggae LPs and one where the music more than lives up to expectations.Black Symbol provided other local Handsworth based bands with the opportunity to record their songs properly in the well equipped Outlaw Studio and then gave them the platform of this album with each band getting two tracks to showcase their talent. This album lifts the lid on a scene that was overflowing with talent and yet rarely documentedSide 1 1. Sceptre - Ancestors Calling 2. Truth & Rights - New Language 3. Black Symbol - Travelling 4. Gerald Love - Jah Children 5. Zephaniah - Music BusinessSide 2. 1. Truth & Rights - Saddest Moment 2. Black Symbol - Spiritual Reggae 3. Gerald Love - Scandal Man 4. Sceptre - Living On Strong 5. Zephaniah - Free Man

Various
The Birth Of Funk

Various
Down In Jamaica, 40 Years Of Vp Records Box