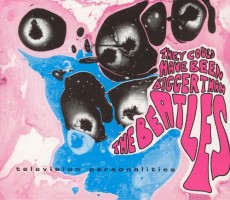 Originally released in 1982, hey Could Have Been Bigger Than The Beatles' was the influential band's third album. A collection of singles, outtakes and unreleased tracks that was intended to mark the band-s breakup, it features avid Hockney-s Diary' and he Boy In The Paisley Shirt' along with renditions of The Creation's ainter Man' and Making Time'.