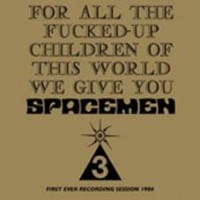 First official CD release of the album /presented in a shrink/wrapped 6 panel fold out card wallet. This release is the latest in an on/going co/ordinated campaign which will see the complete Spacemen 3 catalogue re/issued< properly managed and released on heavy weight vinyl and CD in a fold/out card wallet formats. ]See note to retailers below. "For All the Fucked Up Children of This World" was first released as a bootleg record in 1995. The record consists of Spacemen 3-s first ever recording session from 1984. The music itself sounds like a primitive version of what the group were to become< the dominating sound of the record is a slow, droning psychedelic blues performed with sparse instrumentation. A drum set is matched with a pair of distorted electric guitars, all of which provide a swirl/ing foundation for Jason Pierce-s vocals. The album-s liner notes replicated here are actually an early review of the band by Gary Boldie, where he contemplates the city of Rugby and finds it an odd source for this new sound, and he declares Spacemen 3 as the @all singing, all dancing answer to the problems of a grey 1985.@

Spacemen 3
For All The Fucked Up Children