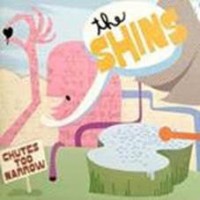 Here-s what Sub Pop had to say about Chutes Too Narrow back in 2003> The Shins- debut full/length, 2001-s Oh, Inverted World, was a stunner< resoundingly well/received and landing itself on numerous year/end best/of/lists. MOJO placed it at 14 of the year and commented, @This quartet from Albuquerque, New Mexico captured our hearts this summer with their pristine pop perfection.@ And, Seattle-s The Stranger went even further, calling it @a referential, brilliant record which had better blow up, or the world has forgotten what pop music is all about.@ As far as we-re concerned it did blow up / seems there-s still some hope for the world and its conception of pop music.