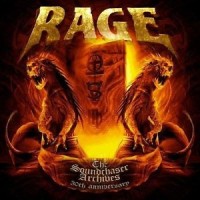 4x 180g LP in hardcase box*printed innersleeves *LP size booklet! What better way to celebrate their 30th Band anniversary as by diving deep into their own history, spanning three decades of an incomparable Metal career - from the humble beginnings in the early 1980s with their debut attempt Prayers of Steel and back then calling themselves AVENGER, through the flourishing 90s that peaked in their 1996 classic approach Lingua Mortis, all the way to the most recent years, which also featured RAGE coming in third at the "Bundesvision Songcontest" in 2009, carving a quarter of a century in stone even more so! Garnish all this with 21 albums released to date and add in some lineup changes and you not only get your average German Metal combo, but a gathering of brilliant musicians that keep reinventing their own sound with every new creative vision to come. Or simply: RAGE! 2014 sees the trio with its lineup consisting of Peavy Wagner, Victor Smolski and Andr Hilgers far from retiring, yet revisiting their own back catalogue and uncovering a series of previously unreleased songs or versions, demo recordings and fractions of ideas, that finally went to find clear sonic ground. To give you a first hint on what to expect from The Soundchaser Archives, the band itself provides a first insight on all 30 tracks this album