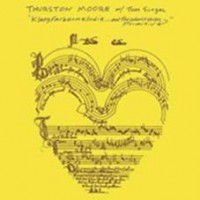 Klangfarbenmelodie..And The Colourist Strikes Primitiv by Thurston Moore was originally released in the same year as his Psychic Hearts album. In the Sonic Youth timeline that's in between Washing Machine and A Thousand Leaves. It's also in a time before people read Kim Gordon's Biography...Anyway, what we have here is a reissue, on vinyl for the first time, of Thurston Moore-s vicious noise/rock set recorded with free jazz drummer Tom Surgal. It was originally released by Corpus Hermeticum, a label owned by Bruce Russell from The Dead C. Russell edited the recording for this release and contributes new liner notes.

Moore, Thurston
By The Fire (2lp)