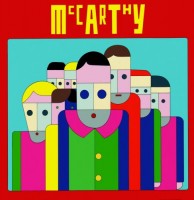 Limited to 500 numbered RED coloured vinyl copies with printed inner sleeve. Line-up includes Stereolab's founding members. Includes 3 track bonus 7" single. McCarthy were formed in 1985 by Malcolm Eden, Tim Gane, John Williamson and Gary Baker. They mixed a melodic style, dominated by Gane's 12-string guitar playing, with Eden's overtly political lyrics, often satirical in tone, which reflected the band's far left leanings. After a string of singles, including "Red Sleeping Beauty" and "Frans Hals", and a track on the NME C86 album, their debut album "I Am A Wallet" was released in 1987 to much critical acclaim. Two further singles appeared in early 1988, then an EP in February 1989 was followed by a second album, "The Enraged Will Inherit The Earth". Originally released in 1990, this was McCarthy's 3rd and final album. It was also their finest. "Banking, Violence and the Inner Life Today" displays McCarthy at the height of its power. Tim Gane went on to form Stereolab, and on here he begins to display the hypnotic layering that would become his trademark in that band. However, "Banking..." is still characterized by jangly guitars and up-tempo pop drumming, with Malcolm Eden's nasal vocals backed by Laetitia Sadier, future Stereolab singer and Gane's future wife. This album displays some of the most adept left-wing lyrics on offer and it is no surprise that McCarthy were a major early influence on Manic Street Preachers who covered three of their songs. Includes bonus 7" single containing the 3 tracks from the "Get A Knife Between Your Teeth" 12".