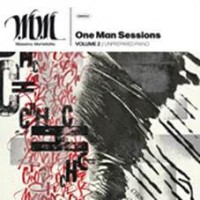 After the oneiric journey through synthesizers on Volume 1, entitled @SYNTHESIS@, Massimo Martellotta *founding member of Calibro 35( returns with the second Volume of One Man Sessions exploring the tonal possibilities of the classical instrument par excellence> the Piano. The instrument is at the center of the scene, and the prepared Piano in the manner of John Cage is here decontextualized and freely "In&Prepared@ and reinvented in a very personal way, placing objects of common use on the strings themselves to obtain unprecedented timbres.Starting from its nature as a percussion instrument, the piano is hit, caressed, blocked with rubbers or left to resonate on the capsule of a microphone, or else pinched like a harp or a cymbalon, while it fires with the battery, the vibraphone or the mellotron.In UNPREPARED PIANO we move from more classical compositions, quoting Chopin and Satie (the opening piece @Come Un Notturno@) to introspective drones ("Risonanza@) to songs that hybridize the languages, delineating immediate melodies and openings in balance between the absolute modernity of Nils Frahm, the moving color imagery of Bad Plus (for example in @Sostenuto@) and the minimalism of Penguin Café Orchestra (@Nécessaire Per Fanciulli"). All this once again held together by an evocative, current and always recognizable flo conductor. An album where the piano is the protagonist then, but the dialogue with the other instruments is continuous, fluid and often we forget that behind every instrument there is only one person.Written, played and produced by Massimo Martellotta at One Man Studio (Milan).Mastered by Tommaso Colliva at Toomi Labs (London).Artwork and cover design> Luca Barcellona.