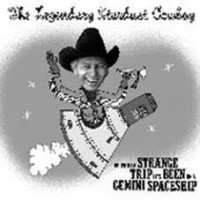 Legendary Stardust Cowboy
Oh What A Strange Trip It's Been On A Geminis.

This album collects all three incredible singles *released on Mercury Records in 1968 and 1969( by The Legendary Stardust Cowboy, the farthest/out of outsider musicians, along with four other tracks he laid down at the same sessions. All selections were recorded in 1968 at T/Bone Burnett-s Fort Worth studio, and lay the foundation of what we now refer to as psychobilly. Limited to 200 copies on BLACK VINYL