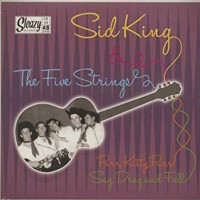 Sid King. Born in Denton, Texas, on October 15, 1936. Despite being in his early teens, Sidney Erwin had been playing guitar for a long time when he made his first radio appearance, and he was yet in high school by the time he formed his first band together with brother Billy (lead guitar) and friends Mel Robinson (steel guitar), Ken Massey (double bass) and Bobby Belcher (rhythm guitar). They played country music as The Western Melody Makers at KDNT, a local radio station where Sid used to do some deejaying, and offered regular shows in different venues around town too. Bobby Melcher was soon replaced by Dave White, a guy that was able of singing background vocals and play drums or guitar if required.The solid sound of the band ended up calling the attention of Jack Starnes who signed them to Starday, the label he co owned with Harold W. Daily. The only record The Western Melody Makers cut for Starday was recorded at Jim Beck's studio in Dallas and issued on June 1954, getting some encouraging reviews and the golden chance to sign a major recording deal. This happened when Jim Beck played the tapes the band had recorded at his studio to Don Law, head of Columbia Records' country division. As a result, The Western Melody Makers, now renamed The Five Strings, went back to the studio in December 1954 and recorded four tracks that completed two singles released in the first half of 1955 by Columbia. Far from the plain country mold of their Starday record, some of these new tracks showed a Rhythm & Blues influence that put Sid and the guys on the emerging Rock'n'Roll craze, with Billboard recognising the "R&B flavour and beat" of their music and referring to "I Like It", one of the songs on The Five Strings' first Columbia single, as "an impressive debut for the boys". Guest spots on the Louisiana Hayride and regular Big D Jamboree shows seemed to promise a bright future for the group, whose second release ("Drinking Wine Spoli Oli" / "Crazy Little Heart") was listed on July 1955 as one of the best-selling Columbia folk records among the likes of Carl Smith and Ray Price. Maybe after reading an article on Billboard stating that "many pop singers today are convinced that a change of moniker may help better their record sales", Sid's last name was changed and there came the denomination they would use on subsequent Columbia singles: Sid King & the Five Strings.Since late 1955 through October 1957, Columbia releases under that new name included great rockin' originals such as "Purr, Kitty, Purr", "Gonna Shake This Shack Tonight" or "When My Baby Left Me", and also covers of "Blue Suede Shoes or "Ooby Doody", but sales didn't get the company requirements and, after a total of nine single releases, there wasn't a new contract. The group disbanded in 1959, after doing some demo recordings they paid for themselves. A last solo effort by Sid King came out in late 1961 on Dot Records thanks to the help of Pat Boone, to whom Sid had met in his hometown back in the early fifties. But, again, nothing happened and, by the mid-sixties, he semi-retired from music and started a hairdressing business with his brother Billy, playing occasional gigs around Dallas until the Rock'n'Roll Revival brought them back in the eighties. It's never too late.TRACKLIST:Side A:Purr, Kitty, PurrSide B:Sag, Drag and Roll

Hillbilly Rawhide
My Name Is Rattlesnake