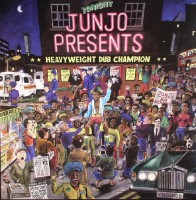 The official re/issue of the dub classic @Heavyweight Dub Champion@ available as extended 2LP vinyl/set with 20 tracks and poster. The original album from 1980 has been state/of/the/art remastered and is twinned with a second disc of the original vocal versions. All music recorded at Channel One with the Roots Radics and mixed by Scientist at King Tubby-s studio with producer Henry @Junjo@ Lawes.