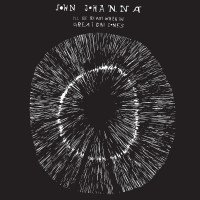 Johanna, John
I'll Be Ready When The Great Day Comes

John Johanna's eclectic output uses psychedelia and oriental tonalities, primal gospel blues and folk / among other ingredients / to create a body of diverse yet coherent devotional music. A singer and multi/instrumentalist who works on cassette and reel to reel tape at his home in rural Norfolk, and with Kristian Craig Robinson (Capitol K) at Total Refreshment Centre in London, his songs are informed by the mystical cosmology of the Eastern Orthodox Church.This release draws from a range of John Johanna pieces gathering four re/mastered tracks that previously appeared on a now sold out ltd cassette tape run and four new tunes. Introducing a incredible gifted singer and player. Leaning in part to the acoustic and dark balladeer aspect of his music, whilst drum machine and blues pieces hint to what's to comes in future