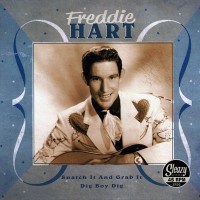 Hart, Freddie
*snatch It And Grab It / Dig Boy Dig

Freddie Hart. Born in Loachapoka, Alabama, on December 21, 1926. Back in March 1956, fifteen years and a few months before topping the Country charts with the million-selling "Easy Loving", Fred Segrest (he had adopted Freddie Hart as stage name at his manager's suggestion only three years earlier) attended his first session for Columbia Records in Los Angeles, California and recorded four self-penned songs that were conveniently paired to complete two single releases. None of these records sold too much, but "Dig Boy Dig" (b/w "Two of a Kind") and "Snatch It and Grab It" (b/w "The Human Thing To Do") established this good ole country man as a cult performer among every Rockabilly fan out there. Just give a try to the cool intensity of the voice sounding over the perfect backing provided by the top musicians that were used on these cuts and you will know why.Freddie's life story would make a good movie. Born in the rural South in a large family of ten boys and five girls, he grew up in poverty and ran away from home several times before quitting school at the age of twelve, then enlisted in the Civilian Conservation Corps and a short time later, when barely fifteen years old, he found himself serving as a soldier in the World War II after convincing his folks to lie about his real age. Freddie spent nearly three years and a half in the Army, seeing action in the Pacific Theatre of Operations and using his spare time to learn martial arts and play night gigs at officers' clubs. After all, he had started playing guitar at age five, improving his singing skills by listening to the Grand Ole Opry and always dreaming of a career in Country music.When he came back to the civilian life, Freddie did every job he could find across the South but did not renounce to become a Country singing star some day and began writing original songs. In the early fifties, after meeting some legendary artists such as Hank Williams or Wayne Raney, things started happening for Freddie, who joined LeftyFrizzell's entourage and finally got a recording contract with Capitol Records that materialised in a serie of interesting singles released between 1953 and 1955. All of them credited to Freddie Hart. But even though Carl Smith took"Loose Talk" (a Hart's original song included on one of his Capitol singles) to number one in 1955 and Freddie's reputation as a top songwriter kept growing (his songs being recorded by Patsy Cline, Porter Wagoner, ConwayTwitty, George Jones or Loretta Lynn in years to come), his own recordings failed to chart and forced the label to give away the artist's contract to Columbia Records, where he scored some minor hits by the end of the decade before starting during the sixties a pilgrimage through other record companies that finally brought a deserved reward when he was re-signed by Capitol Records and "Easy Loving" became a big success in 1971. The song opened a new era full of hits, awards and recognition that lasted well into the eighties. Freddie has remained active ever since, doing some Gospel albums (as he has stated "Number one on my hit parade is Jesus Christ") and feeling always grateful for a lifelong career in Country Music... Something to be proud of.TRACKLIST:Side A:Snatch It and Grab ItSide B:Dig Boy Dig