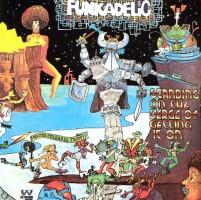 Funkadelic
Standing On The Verge Of Getting It On (westboud)

A vinyl/reissue of the sixth Funkadelic LP, originally dating from 1974. Recorded and released after a brief hiatus, this set features the return of the blistering guitar work of Eddie Hazel, along with the consistently brilliant keyboards of *future Talking Head( Bernie Worrell. Another colourful feather in the increasingly bizarre and brilliant cap of Mr. Clinton!