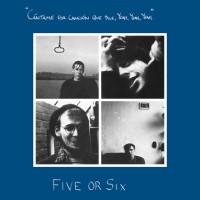 Originally released only in Spain in 1982 on the Edigsa label after a string of superb early records on CherryRed, its limited availability elsewhere has made this LP a highly sought-after item for years.A special Record Store Day 2015 release.First ever reissue of "Cántame esa canción que dice, yeah, yeah, yeah" by Five or Six, one of the less heralded acts of the classic Cherry Red era. Released only in Spain in 1982, the LP contains a few cuts from their fantastic early singles and EPs but Five or Six used this opportunity to offer mostly tracks unavailable elsewhere, all displaying the diverse and immense talent of a band that should be more well known. With echoes of Wire, This Heat and Joy Division, this is one of the rarest and most outstanding records to come out of British post-punk.TRACKLISTSide A1. F FOR FAKE2. ANOTHER REASON3. LOST CAUSE4. POLAR EXPOSURE5. THREE DECISIVE EVENTSSide B1. CHALK CIRCLE2. THAT STRANGE FEELING3. SLEEPWALK4. EXHIBIT A5. TRAMPOLINING6. YOU, THE NIGHT AND THE MUSIC[END]

Newman, Colin
Not So