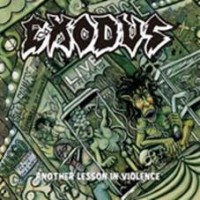 This 2016 vinyl edition comes in 2LP picture disc with Gatefold Jacket, limited to 400 copies. Reissue of the second live album from Exodus, originally released in 1997 after a five years break and recorded during a live show at The Trocadero in San Francisco. With the classic line/up *Holt, Hunolt, Gibson, Hunting and Baloff(, this performance includes all highlights in Exodus-s career like @Piranha@, @Seeds Of Hate@ or @Bonded By Blood@.