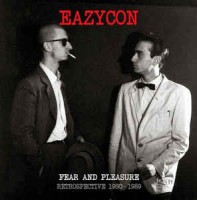 Carlo Musso (Carl Lee) and Frankie Partipilo first met in high school in Turin. Moved by a common passion for arts & music, the two came together as a voice/guitar/sax project more akin to free experimental area. They were on the verge of a new decade, the seventies were almost over and the two musicians were movin' on, forging a brand new sound. Prog and free jazz were still prevalent but the upcoming new wave earthquake was just around the corner.The combination proved quite excellent and Eazycon were know for being a fully geared live band. The recordings are somewhat sparse; the band had a track - Haiti Blues - on the highly influential compilation Gathered (1982) and a single album, In The Tradition (1987). This compilation is meant to unleash the legacy of the art-rock duo, with many unreleased recordings and outtakes available for the 1st time in 30 years. Early on, the band was labeled as the Italian answer to New York's no wave scene. In the second half of the eighties a change became evident, the compositions are more sparse and the use of flute and sitar is clearly a love message to the near eastern. Carl Lee, who sang in English, is equally informed by the Dada movement and a sort of esoteric occultism. The band isn't afraid of change, they even cover a traditional country number ("Wagon Wheels") and avant-garde stalwart "Noonah" (a manifesto composed by Roscoe Mitchell of the Art Ensemble of Chicago).

Pencils
Running Out Of Time

Shy
You Make Me Weary/keepin' On Top