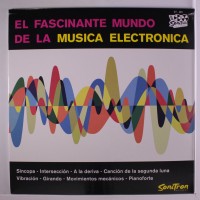 "Humans impressions while orbiting the space"Since it was established in 1914 the Phillips Research laboratories (NatLab) in Holland has given us the very firstartificial reverb, tape recording, stereo, the cassette tape, cd, DVD, blue ray, and Songs of TOM DISSEVELT & KIDBALTAN. You see back in the cold war, with the arms race and the frequent threat of annihilation via an atom bomb,technology had developed something of an image problem. Consequently Phillips brought in some composers, in thehope that their technological music could put a human face on the new toys. The result was Songs of the SecondMoon - the first piece of electronic pop music, recorded in about 1957. It was produced over a couple of days byDick Raaijmakers (aka Kid Baltan), pressed as a single and given away to visitors to the lab. Despite the tunes loftystatus in the pantheon of electronic music, Raaijmakers was inexplicably demoted to assistant to fellow composerTom Dissevelt. However the duo proceeded to record twenty or so tracks over the next three years in what was aquite laborious process. The Philips label however released several tracks by the duo spread over a couple of,sometimes-futuristic library music-like compilations like "The Fascinating World Of Electronic Music".Limited edition of 300 units.