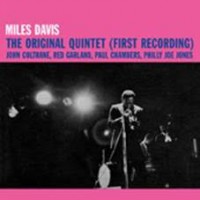 In 1955, Miles Davis played a beautifully received set at the Newport Jazz Festival and was offered a contract with Columbia Records if he could get a steady group together. In order to record for Columbia, Davis would first have to settle an obligation to Prestige and so he put together the now legendary quintet with John Coltrane, Red Garland, Paul Chambers, and Philly Joe Jones. It was under these conditions, in a desire to churn out as many records as possible to change labels, that Davis recorded some of the most celebrated music of his entire career. This group, in the span of several months released a half/dozen LPs including this one and the great Cookin', Workin', etc. titles. This title, originally recorded in 1955 features a great Ellington piece, the brilliant Miles original "The Theme", and several other great tunes, but most importantly it is the introduction to a group that features two towering giants of jazz together on some of the fieriest playing of either's career. Brilliant. Limited edition of 300 copies.