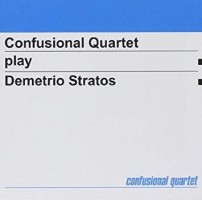 After releasing a couple of albums since their 2011 reunion, Confusional Quartet is back again with an extraordinary new project; a brand new release featuring the voice of the great late Demetrio Stratos, the legendary lead singer of Area - International Popular Group.At the tail end of the seventies, the Bologna based Confusional Quartet represented one of the finest examples of the Italian New Wave scene. A complex and energetic mixture between experimental Rock, Jazz and fresh sounds resulting from the use of new technologies. In early February, 1979 the band's sound inventor and producer Gianni Gitti, armed with microphones and a Revox tape recorder, met Stratos in Bologna and worked on the recording of what would turn out to be one of his very last solo concerts before his premature death. In fact Gitti had the chance to record the complete Teatro San Leonardo performance, plus some precious extra material coming from the daytime rehearsal.After 35 years, when the Confusional Quartet became aware of the existence of those recordings, they immediately decide to use them as sound source and inspiration for some new compositions; a great challenge for such an instrumental music group. This time the voice is there, and what a voice! In these previously unheard recordings Stratos displays his well known sonic vocabulary, a multiplicity of vocal materials and extended techniques such as double sounds, harmonic and throat singing - a wide vocal sound picture moving from improvisation to sound poetry. Surprisingly, the final result shows great integration between Stratos' vocals and the Confusional Quartet's typical blend of keyboards, guitars, bass and drums. The music seems to take shape very spontaneously, avoiding all kind of celebrative moods, except for the well known Area composition, "Cometa Rossa", and "Manifest'O", a declared sonic tribute to Demetrio's work experience. The fundamental idea of this new project takes inspiration from concepts like collective work and total freedom - some kind of no man's land where simple melodies meet unusual harmonies and irregular rhythms. A peculiar sonic environment, hard to relate to a specific music genre or style. Also, this music became the soundtrack of a short film realised by Francesco Conversano and Nene Grignaffini, that will be projected during the Confusional Quartet's live concerts. The main instigators of this project are: the Expanded Music record label, Gianni Gitti, and Stratos' wife, Daniela Ronconi Demetriou, who encouraged and followed the whole thing.

King Gizzard & The Lizard Wizard
Murder Of The Universe - Indies

Monarch
Beyond The Blue Sky