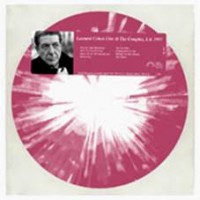 The Future World Tour began in late April, 1993, in support of The Future, Cohen-s 1992 album. It was the only tour Cohen would go on in a nearly 20 year period *1999/2007(. Just prior to the first date of the tour, Cohen and his group recorded a live set at The Complex in Los Angeles, for a live radio broadcast. Including tracks from The Future as well as classics like @First We Take Manhattan@, @Bird On A Wire@, and @The Sisters Of Mercy@, this live set is impeccably recorded and is one of the few available live documents of Mr. Cohen for all of the 1990s and into the late 2000s. A truly beautiful live radio broadcast from the brilliant, beloved, and dearly missed Leonard Cohen, released in a limited edition on pink vinyl with white splatter.Track list> Side A> A1 First We Take Manhattan A2 Ain-t No Cure For Love A3 Dance Me To The End Of Love A4 Democracy Side B> B1 I-m Your Man B2 Coming Back To You B3 Waiting For The Miracle B4 The Future