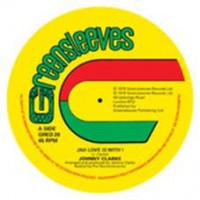 Originally released in 1979 "Jah Love Is With I" is a long sought/after and highly collectible 12"inch single with two tracks which are presented in the extended -discomix- style of the late 70s, with the vocals edited directly into an extended dub mix on each side. Side A features the 6>28 minutes extended version of "Jah Love Is With I" and side B has the 5.52 minutes version of "Bad Days Are Going"!Among the ranks of singers, only Johnny Clarke comes close to challenging Bob Marley ^ Dennis Brown for reggae-s crown, through his unequaled run of hit songs. His output of mid/70s classics powered by producer Bunny "Striker" Lee give Clarke status among the top artists of the period, and he mainstains contemporary relevance on the live show and reggae festival circuit.

Clarke, Johnny
Enter Into His Gate With Praise

Oldians
Out Of The Blue (2lp)