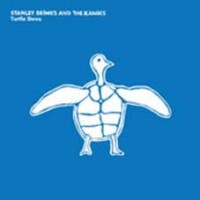 Double 12" vinyl *green & white(. Stanley Brinks *aka André Herman Düne( is joined once again by the Norwegian folk collective The Kaniks, this time stripped back to a two piece of fiddle and banjo *"The Old Time Kaniks". Eschewing a traditional recording studio, Brinks took The Kaniks to a remote island outside the small town of Egersund in south west Norway. Over the course of week of midnight sun, midnight swims and midnight beers on their isolated rocky island, living and recording in the only building on the island, the 19th century Vibberodden lighthouse, they recorded the double album of modern day folk tales of love, loss and mischief.Brinks is renowned for his unique antifolk style> both playful and suggestive, insightful and entertaining. His mastery of storytelling, presented in both English and in French on these albums, introduces you to the free spirited world of Brinks' life as a touring musician. His fondness for calypso and the unusual provide the perfect foil to The Kaniks', whose folk instrumentation and country and bluegrass influences take this double album to a joyous place Brinks hasn't been before in his extensive back catalogue.A1( Ten In The Morning A2( For You A3( L'Hay/Les/Roses A4( Whole Other World A5( Casse Dechire