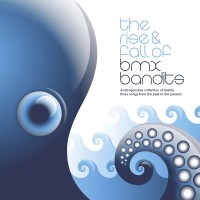 Who are the BMX BANDITS? Where did this group come from, who, after more than 20 years together, have been talked about by people like TEENAGE FANCLUB's Norman Blake (who was in the group in its beginning), Liam Gallagher or Kurt Cobain? Who are the people responsible for this band who have had members of THE VASELINES, TEENAGE FANCLUB and THE SOUP DRAGONS, among others, in its midst? Where was this group, with fans not only in Europe and North America, but also in Japan and the rest of Asia, born? How have they been able to release music on mythic labels like Creation Records, 53rd & 3rd or Vinyl Japan, among many others? Who is this Duglas T Stewart whose name we've also seen on the albums of Alex Chilton, Chip Taylor, Stevie Jackson, Eugene Kelly, Francis McDonald and Ally Kerr, and who also produces his own albums? The way this Scottish band has given birth to its albums (the first in 1985), completely outside of the music industry's paradigms, spreading its melodic seeds through half a world's worth of record labels in every format imaginable (the single or the EP is a focus for them), has gained them a cult status, which has only been consolidated by the incredible songs they have been giving us throughout their career; songs with a clear affinity for hyper-melodic pop, strongly influenced by people like Brian Wilson, Ennio Morricone and Serge Gainsbourg.TRACKLIST: 01. E102 02. Disco girl [2008 Version] 03. Your class 04. I can wait forever 05. Right across the street 06. Stardate 07. Come clean 08. Extraordinary 09. Baby loves lovin' 10. Let mother nature be your guide 11. Rimbaud & me 12. Life goes on 13. Hey little Tomboy 14. The day before tomorrow [2008 Version] 15. Stupid 16. I wanna fall in love [Version 2] 17. Whirlpool [1995 Version] 18. Tugboat (with Angel Corpus Christ) 19. Students of life 20. Help me, somebody 21. Intermission [Little seashell ear] 22. Love's sweet music 23. I don't wanna grow up