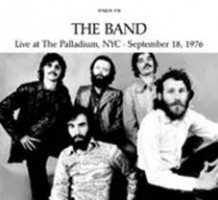 Originally known as the Academy of Music, this NYC movie theater and venue was rechristened The Palladium on the same night this killer Band set was recorded. Featuring the Howard Johnson Horns and recorded just a few months before The Last Waltz shows in San Francisco, this great recording can be seen as a precursor to those shows. The Band knew the end was in sight and they wanted to squeeze every last bit of juice out of the group while they could. A truly ripping set from one of the great roots/rock groups of all/time. A classic live broadcast remastered in audiophile quality and presented beautifully in a digifile case. Track list> 1. Ophelia 2. Shape I-m In 3. It Makes No Difference 4. Across The Great Divide 5. The Weight 6. King Harvest 7. Twilight 8. The Night They Drove Old Dixie Down 9. Stage Fright 10. Acadian Driftwood 11. Chest Fever 12. This Wheel-s On Fire 13. Don-t Do It 14. Up On Cripple Creek 15. Life Is A Carnival 16. W.S. Walcott Medicine Show