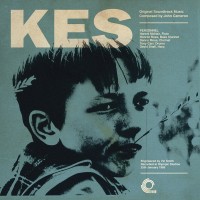 Having left Cambridge's Jazz scene John Cameron went straight on to arranging music for Donovan and moved into working with acts such as Hot Chocolate and Cilla Black. Aside from being responsible for the Led Zeppelin instrumental on TOTP Cameron made some incredible film soundtracks, including for Ken Loach's 'Kes' and this smokey jazz encrusted zombie biker film 'Psychomania'.OUT OF PRINT SINCE 2001, A CLASSIC TRUNK RECORDS RELEASE GETS A RARE REPRESS. THIS IS PASTORAL BRITISH JAZZ FILM MUSIC AT ITS VERY BEST, WITH SLEEVENOTES BY JARVIS COCKER.