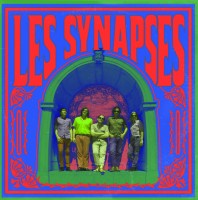 Les Synapses is a french band from Le Havre. Mainly psychedelic that goes from Antoine-esque with a fuzz-drenched freakbeat oriented sounds. 12 tracks recorded in Lisbon at the Golden Pony studios in the spring of 2017. After more 20 years of existence, one EP and a CD demo along the way. The band always were more concentrated in the live performances than go to a studio and record them. Now, finnaly they have their well deserved LP out, here on Groovie Records. And we are proud of it. Les Synapses show in their music what we normally hear from underground 60s DJ, of course they-ve listen to the real stuff, well referenced_ they surely are, all members are solid vinyl collectors, so they simply avoid all cliché, that you can easily hear from so many young band. You can-t expect no more than a KILLER album that will delight all the garage freaks and psychedelic fuzz lovers!!!!

Morlocks
Bring On The Mesmeric Condition

Dragontears
Turn On Tune In Fuck Off!