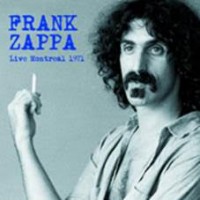 1971 was a year of big change for Frank Zappa and his Mothers Of Invention. He shook up the group's membership significantly and was making big changes in his sound and vision, and really creating some of the greatest music of his career. The group had played a gig earlier in the evening and then recorded this mostly acoustic set for broadcast on CKGM/FM radio. The set finds Zappa backed by the former Turtles Mark Volman and Howard Kaylan (aka The Phlorescent Leech ^ Eddie), as well as Ian Underwood, Aynsley Dunbar and more. A killer set of truly original music from one of the USA's greatest ever musical exports.Track list> 1. Daddy-s Home 2. The Polka & Drum Solo 3. Mudshark 4. Magdalena 5. Station Id By Frank 6. Jam (Including Pirate Jenny & Nikki Hoi) 7. Daddy Daddy Daddy 8. She Painted Up Her Face 9. Band Intro By Mark Volman 10. Oh Baby Don-t Drop It 11. Happy Together & Penis Dimension 12. Outro By Frank & Polka Reprise 13. Ghom