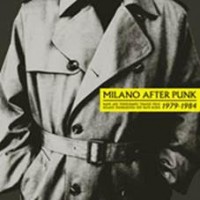 Back in stock! Milan, 1979, only two years had passed since the explosion of punk but it seemed like ten years had passed, 1977 had inexorably changed the destiny of a generation of musicians. Milan in those years felt a bit like Manchester, a city in black and white, with monuments grayed by smog, busy and still far from becoming the "Milan to drink" of the mid/80s. The music scene was totally disconnected from the rest of the Italian underground, the bands were born and imploded within a few months. The inputs that arrived thanks to the English weekly New Musical Express and some Italian fanzines were essential to know what happened across the channel almost in real time. The concerts at the 2001 Odyssey, a club where almost all the really important post/punk bands performed, were fundamental to understand and feel part of something that resembled a revolution, a movement that in those years produced little in terms of discography but that today, after almost forty years, we reveal the absolute uniqueness of the proposals of the protagonists of that Milanese season. Sharp guitars, primordial drum machines, synthesizers bought at a high price and 4 tracks cassette recorders were the tools used to affirm their belonging to a creative movement that developed simultaneously throughout Europe.File under minimal synth, post/punk, synth/pop, punk funk, no waveConcept & compilation Fred VenturaTrack list Side A 1. Aus Decline / Goin- On Jot 2. Oh Oh Art / Cosmic Disease 3. Der Blaue Reiter / Drowning 4. Other Side / An Impossible Dream (Live) 5. Cast Of Thousands / Hit My Mum 6. 2]2)5 / Meeting Mc. L (ubmix) Side B 1. Monofonic Orchestra / Overground 2. After Budapest / House You Never Lived 3. La Maison / You Night Head 4. State Of Art / Sleeping Together (Live rehearsal demo) 5. Nobody / Blitz (Pt. 1) 6. Actor's Studio / Brave Runner 7. Jeunesse d'Ivoire / The Sea

Mercier Descloux, Lizzy
One For The Soul