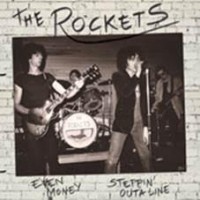 The Rockets were natives of London's Ladbroke Grove, and precursors of UK punk rock heroes Warsaw Pakt. They played high-energy rhythm & blues with hard-boiled street-smart lyrics delivered quick and cool against super-charged Chuck Berry guitar licks."The Rockets started in 1975, heavily influenced by Dr Feelgood, who had a residency at the Kensington pub around the corner," relates guitarist Andy Colquhoun. "It was Brit R&B. We played half a dozen Bo Diddley numbers, including'Cops And Robbers', and 60s tunes such as 'I Fought The Law', 'Don't Gimme No Lip' - which, pre-Pistols, was a Dave Berry B-side Bo knockoff - and we played numbers I wrote that eventually got recorded by Warsaw Pakt."The Rockets' line-up featured lead singer Jimmy Coull, Andy Colquhoun on guitar and vocals, bassist Oz Osborne (aka "The Anadin Kid") and Dave Rochelle on drums. "Jimmy Coull has a great R&B voice and was noted for his taste in wines in large containers at very reasonable prices," says Andy.Another key figure in The Rockets was Frank Day, who acted as manager and lyricist. "Frank was, and probably still is, a dapper bloke - a West London 'smoothie' with a passion for R&B and he booked most of our early gigs," explains Andy. "He worked for the London council, and as a croupier, and had enough readies to keep us running. We paid him back, of course."The Rockets made the rounds on the London pub rock circuit and around the south and Midlands. In time-honored tradition they also traveled to Germany - Munich rather than Hamburg -, where five-sets-a-night club dates shaped and sharpened their sound.In early 1976 they recorded a six-song demo tape. Two of the best tracks are presented here for the first time: the tough, cocksure rocker 'Even Money' and the explosive, Who-influenced 'Steppin' Outa Line'. While The Rockets were still rooted in rhythm & blues, their revved-up approach signaled the changes that were already taking place in the streets around them. Pub rock and R&B bands were shedding - or shredding - their old clothes, shearing their hair and reinventing themselves as the part of a new movement: punk rock. The Rockets found themselves opening for bands like The Clash, whose leader, Joe Strummer, had only months before been in R&B/pub rock stalwarts The 101ers. Gradually, The Rockets' already loud and fast sound became louder and faster. The band found they were in a state of identity crisis. "We had a review in NME where they said that we couldn't make up our minds if we were The Pretty Things or The Ramones," remembers Andy. "It was fair enough."Before long the group broke apart. "When The Rockets started getting a bit heavier and faster Frank and Dave drifted away," says Andy. Coull and Colquhoun brought in rhythm guitarist John Manly, bass player Chris Underhill and drummer Wolf (later replaced by Lucas Fox of Motorhead) and became Warsaw Pakt. Significantly, their repertoire still included several Rockets songs, including 'Steppin' Outa Line' and 'Even Money'. With John Manly's input, though, 'Even Money' took on a new meaning. "John entirely re-wrote the lyric," Andy says, "and changed it from a saucy Frank Day lyric to a tale of junkie despair."Right here, though, you can hear those two songs in their original form - rough and ready Rocket-powered rhythm & blues from the streets of mid-70s London.Mike StaxTRACKLISTSide AEVEN MONEYSide BSTEPPIN' OUTA LINE

Wet Ones
Wet Ones

Urgent Kicks
In The Wrong Place