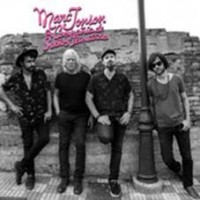 After reissuing in 2018 his 1972 psych folk/baroque pop masterpiece "Years" and 1992's power pop gem "12 In A Room", Munster continues its collaboration with Marc Jonson with this 7" featuring two new tracks, which acts as a preview to a full length of new material later this year.Recorded in Cantabria, Spain with the backing of local three-piece band Compañía de Sueños Ilimitada, this single is further proof of Jonson's gift for writing wonderful pop music. He talks about the new songs:'My Girlfriend (Doesn't Like The Ramones)' and 'I Don't Wanna Go To School Today' preserve how I started out loving music with a pure teenage angst and simple melodic sensibility. They don't stray too far from their inspired essence because music can be whatever it feels best doing. If you're not feeling good about playing your guitar, getting back to basics usually works for me.Phil Spector, Brian Wilson and Mike Love, John Lennon and Paul McCartney, Mick Jagger and Keith Richards, Del Shannon, Dion, Arthur Lee, Van Morrison, Gene Clark, Chuck Berry, Little Richard and Bo Diddley - these are my "go to" artists. Sometimes I even run to them and guess what? I'm set back straight again!TRACKLISTSide AMY GIRLFRIEND (Doesn't Like The Ramones)Side BI DON'T WANNA GO TO SCHOOL TODAY

Meat, Karen
You're An Ugly Person