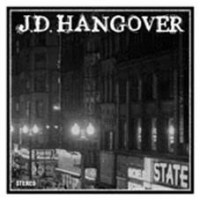 (+MP3) Hound Gawd! Records is pleased to announce the release of the self/titled debut album by J.D. Hangover. «It is primal, visceral and dangerous, it snarls and seethes, bullys and bruises» explained Dancing About Architecture Magazine. After a string of floorshakin' gigs across Europe and the UK with such likeminded souls as Boss Hog, The Scientists, PIL and Alejandro Escovedo, they blipped on the radar of Hound Gawd! Records. The upshot of all this is that the «J.D. Hangover EP» will now be available on good hard honest vinyl, how it was meant to be heard. And that's the truth. This album is recommended to fans of experimental rock ' roll and bands like The Gun Club, Suicide, Boss Hog, Gallon Drunk and Lightnin- Hopkins.

Hollers
I'll Do The Talking