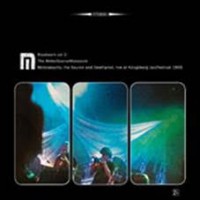 Originally released in 2000 and since long out of print. In 1995 Motorpsycho was invited by Trondheim freebag jazz combo The Source to share stage at Kongsberg Jazz Festival. The band's psychedelic/kraut/prog-leanings hadn't taken them as far as jazz yet, not to mention the Ornette Coleman style free jazz stuff The Source were playing, but they were game. This is the result... some 70 minutes of metal overkill, early 70s crypto funk, analog synth hell and some pretty freeform, out there escapades. An early example of Norwegian genre-crossing that still sounds surprisingly fresh 23 years later.

Pretty Lightning
The Rhythm Of Ooze