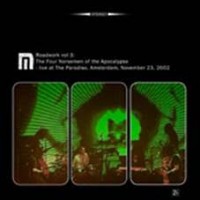 Previously only available as part of the "Haircuts" DVD. Remastered for vinyl by Helge Sten. Recorded at the venerable Paradiso club in Amsterdam in November 2002. The club streamed its own recording of the show at the time, but what we have here are Motorpsycho's own recordings, a whole other kettle of fish. Meaning properly mixed from 24 audio tracks. The centerpieces of the concert were heavily extended versions of old warhorses such as "Hogwash" and "STG" (both fantastic!), showing a band more concerned with exploring the furthest reaches of their improvisational abilities rather than trying to recreate the detailed arrangements for string-quartet and pop-group that had dominated their three previous albums.