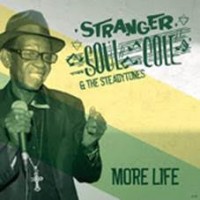 Cole was born in Kingston, Jamaica in 1942 and nicknamed 'Stranger' by his family, as they considered that he didn-t resemble any member of his family.Successful as a songwriter, writing 'In And Out The Window', which was a hit for Eric Monty' Morris. This success gave him the chance to make his recording debut in 1962, instantly finding success with singles such as 'Rough And Tough' and 'When You Call My Name' (a duet with Patsy Todd) for producer Arthur 'Duke' Reid. Further success followed with singles for Reid through to the mid-1960s, and he also worked with other producers at this time, including Clement 'Coxsone' Dodd (a duet with Ken Boothe on 'Worlds Fair'), and Prince Buster. Further duets included recordings with Gladstone Anderson (on 'Just Like a River') and Hortense Ellis, the tendency to record duets apparently due to his shyness when it came to singing alone.In the late 1960s and early 1970s he recorded with several producers, including Bunny Lee, Lee cratch- Perry and Sonia Pottinger. These included further material with Todd as 'Stranger & Patsy'.