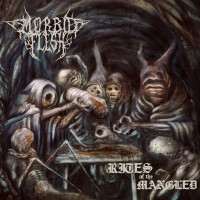 Morbid Flesh
Rites Of The Mangled

MORBID FLESH was formed in 2007 from the ashes of UNDERTAKER by Vali (vocals), Jose and Marc (guitars), Makeda (bass, also in INSULTERS) and Gusi (drums, also in GRAVEYARD and INSULTERS). The intention was to create festering Death Metal in the vein of pioneers like DISMEMBER, ENTOMBED, DEATH and GRAVE. This album set waves in the underground and MORBID FLESH rose rapidly, making a name for itself around the world. Not satisfied with that and with a slight lineup change (Gusi changed to the guitars among with Carlos and Michel entered as the new drummer), MORBID FLESH recorded another slab, the band's most powerful and effective material till date, to be released on Germany's Unholy Prophecies record label. "Embedded In The Ossuary" is slated for a 2014 release and is bound to leave a mark, an indelible one, with its unique appeal and highest quality of Death Metal music.